Some people are hard to like. Obsessives can be interesting, but they’re seldom likeable. So, I’ve never really been a James Cameron fan. Until recently that is.  It’s becoming clear that now there are at least two James Camerons.

But lately there’s James Cameron, the National Geographic Explorer-in-Residence.  This is the royal ‘world-is-my-OysterRolex’.. Sir’James! And it’s this new Cameron, the modern day Jacques Cousteau, I’m starting to like.

Recently, after literally voyaging to the bottom of the sea (and back), Sir’James the explorer emerged from his submersible, the DeepSea Challenger, and sheepishly admitted that things had been, well… a bit cramped!!

“I probably should have made the cockpit about 3” larger.. so I could have at least stretched out my legs!”.

I found this admission winning. His DeepSea ‘vertical torpedo‘ cost well over $5,000,000 U.S.. The project was privately funded with a corporate sponsor, Rolex. But the sub’s architect? Cameron himself, right down to the ‘kawasaki-green‘ paint job!

Fig. 1- FormFonts 3D model of the DEEPSEA CHALLENGER and Sir’James.  Modeled by the amazing Alan Fraser. Process image shows how FormFonts models everything – from scratch!

So honestly, my very next thought was … “If only Cameron and his aqua-nauts had known about Google SketchUp and FormFonts 3D Models!!” With some previz, we could have surely saved him some very real physical pain.

Cameron who is 6’2”, folded his frame into the 43” ID spherical-steel cockpit, and stayed crouched there for a little more than 3 hours. At-depth, the hydraulic arm and ‘slurp gun’ malfunctioned, So Sir’ Cam could only just…look around.

He stared out into the Alien Abyss, quietly eating his Scuba Snacks TM – a single banana and granola bar – the only two things inside the cockpit besides James.  But it was as they say…     A Good Day!

Had this Deep Dive lasted the full 10 hours (as planned), things could have come out differently. In fact, they would have had to suck Sir’James from his bathy-sphere, with his own slurp gun.  Resurfacing 6 hours early was, in retrospect, Lucky! 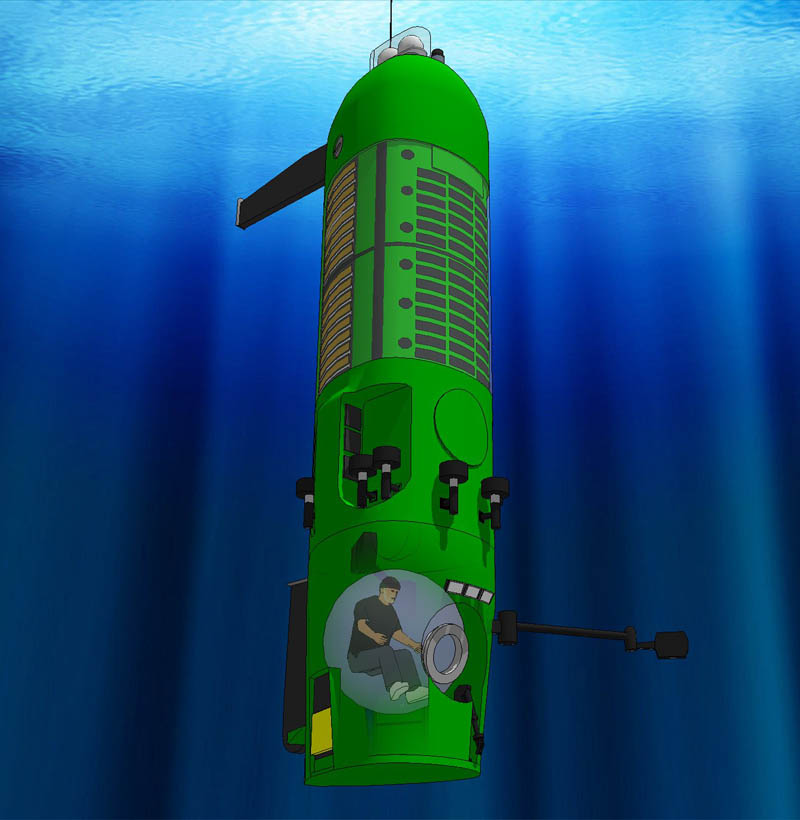 So sure, you’re skeptical and I don’t blame you. “Mr. 3D! James Avatar Cameron, didn’t make any 3D models, mock-ups, or even full-on prototypes of the cockpit”. He just made the world’s first solo-dive to the ocean’s deepest point, without any models at all!

Well of course not! But see for yourself how the cockpit was designed and tested. Below, CNN’s Jason Carroll interviews Cameron about his ‘tiny sub’ (ouch!). Be sure to watch the video to the end. Wait for it!!

Fig 3 – Note: the pressure at-depth is so great, the cockpit actually contracts 3” in interior diameter. So What ID (surface or depth) did they use for the physical prototype?”

But let us not forget that Sir’James after all, is still that 3D movie-guy.    So of course…     Mr. Camera-on! had to shoot the Deep Dive in High Definition 3D video. So soon we can re-experience it, courtesy of NatGeo. Oh Natty-G!

In short, the DeepSea Challenger is either – A world-class science submersible, or, just the world’s biggest GoPro camera!  A tool for DeepSea Science or Infotainment?  Maybe both!

Mr. Cameron, Some of us (yourself included) are old enough to fondly remember the Space-food craze. Tang(TM) powdered orange drink, and those pitiful foil-wrapped extrusions ‘Space-Food Sticks’. So next time, take along Sir’James Scuba Snacks (TM)!

Established in 2002, FormFonts 3D Models has served over 11,000 subscribers. FormFonts 3D Models offers over 50,000 of well-made and with the right-amount-of-polygons models and textures on a subscription basis. Throughout each month we upload new models for download. If you don’t see what you need, request it to be made. We offer models in the following formats: Google SketchUp ® | Autodesk®3ds Max®, Autocad®, Revit® & FBX
View all posts by Formfonts 3D Models →
This entry was posted in For Fun, History and tagged 3D Models, Alan Fraser, Clif Bar, DeepSea Challenger, Explorer, FormFonts, James Cameron, NatGeo, National Geographic, Natty-G, Rolex, Scuba Snacks, slurp-gun, space food. Bookmark the permalink.