When I was a young architecture student studying in Denmark, I attended a brilliant dinner at the Royal Danish Academy of Fine Arts. It was an invitation only affair, and much of the Royal Academy and DIS architecture faculty attended.

I had likely been invited because (in a design charrette) I chose the Scandic Palace Hotel on Rådhuspladsen as my favorite local building – a masterful mashup of Baltic Romanticism + Art Nouveau. Only later did I learn Professor Anton Rosen, a former Academy member, had designed it.

After dinner that magic moment arrived. Everyone was having their coffee and weighing up the evening: Should I run for an early train home, or, Stay and talk-and-drink awhile? Several attempts at after-dinner conversation were made, but none took.

Prof. Jørn Peder Hansen and I were at a particularly good table – we were cozily ensconced among the loveliest female danish architecture students – ever! No way was I ready for the evening to end.

I knew those assembled may be interested in what this young Amerikanere’ would say about architecture. But I also knew that if I wanted the evening to last –  I had only one shot, and it had better be pitch-perfect!

Drawing on the beautiful golden-courage that is Danish beer, I asked those assembled…

“So what about Jørn Utzon, then. Why don’t we hear any more about him?”

The room filled with appreciative Danish snorts-n-sighs. Danes will suck in air audibly when something strikes them the right way. I had side-stepped the obvious-and-annoying question about Danish Star’chitects – Henning Larsen, Tegnestuen Vandkunsten, or A5, etc.,

Rather, I had shown a real and deeper appreciation of Danish Architecture.  And, Yes! I believe this would now be worthy of further comment, discussion, and story-telling ..

We continued for many happy hours of drinking, talking and flirting. I actually felt…. Danish. And deep-lore was revealed. Utzon was a very interesting fellow. But the evening ended with the best story of all – as told byJørn Peder Hensen, himself. 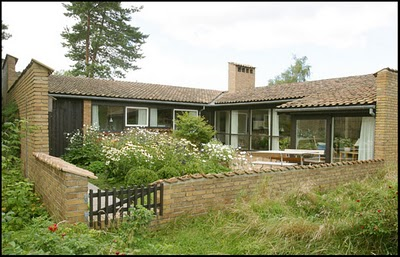 I always assumed that the sinuous layout of the Kingo houses was a creative use of french-curves, or a sympathy towards topography of the site, and that these lovely brick residences were uniquely Danish.

But Peder-Hansen explained that Utzon drew upon Chinese and Islamic influences for the buildings. And the string-of-pearls layout? It obtained from Utzon’s experience as a young architect in North Africa – where masons used a knotted-rope to measure and layout their buildings.

This knotted rope fascinated Utzon, for all that it implied, and he exploited this flexibility fully in Kingo Husene. And so, Prof. Hansen concluded our evening splendidly with..

The way we measure does matter. A lot! And like it or not, the tools and software we use are as confining as they are liberating. As the Utzon parable illustrates, when the way we measure things changes, our designs can change radically, and very suddenly.

One only has to look at the GooGy shapes and architecture of Frank Gehry to realize this is true. None of his sculptural form-giving would have been possible without parametric CAD. Even if he had to use software for aircraft design (Catia) to begin with.

I’ve been telling people that we are on the cusp of The Raster Revolution(TM). An explosion of 3D raster-data driven by digital metrology, that will likely result in the displacement of dead parrots (i.e., polygons) as the privileged paradigm for 3D.

(A voxel represents a single sample, or data point, on a regularly-spaced, three dimensional grid). In short a Voxel is a 3D pixel or raster – hence the Raster Revolution.)

3D Laser Scanning (LIDAR) has accelerated the Raster Revolution by measuring nearly everything digitally – from the earth’s 3D surface from the Space Shuttle, to Google StreetViews, to building interiors (see Marc’s Post – Hey Algorithm, It’s a flat plane), and even 3D objects.

It now seems almost obvious that laser-scanners, digital point clouds, and voxel data will fundamentally change 3D modeling forever. I’ve been saying so for almost a decade now, and I’ve told those that would listen, that what we really need is a… SketchUp-for-Voxels!

So you can imagine my delight when Alan Fraser sent this interview with Bryn Fosburgh, VP at Trimble this morning, and I read the following…

“Currently, Pointools has a plug-in for SketchUp that allows for the use of point cloud data, and Fosburgh said SketchUp’s API would allow for Trimble and other third-party developers to fairly easily expand the program’s ability to utilize as-built 3D data.”                source:   Spar Point Group

Not only does this confirm some of my aggressive ‘connect-the-dots’ predictions for SketchUp 3.0 , it cinches my conviction that we are truly entering a new period of revolutionary change in 3D modeling.

These changes involve nothing less that a whole new way of representing reality,  something metaphorically like the invention of Pointillism in the late 1800s. 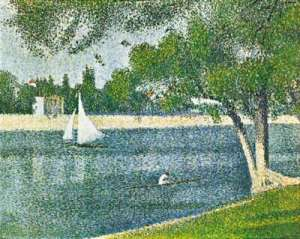 Within a few short years, we may look back at polygons affectionately – as an historic means of representation of reality – perhaps they way we now regard a Cubist painting, or the charm of old mechanical drafting tables. It’s a bold prediction, but consider this:

Now that 3D laser-scaning is widely available, highly accurate, easy to use, and increasingly inexpensive.. it solves a fundamental problem of 3D world-making, something we content-types refer to as – the first cost of content creation.

In Short –  3D laser-scanning is reducing the first-cost of content creation for significant amounts of in-situ content. We will soon be able to Rip’ Reality, as easily as we do an MP3.

The Raster Revolution is already here, and the future is about to become widely distributed… in SketchUp!

Thanks for reading and subscribing! –  FormFonts 3D Models

Raster Revolution (TM) is a trademark of FormFonts 3D, All Rights Reserved.