My last post Raster Revolution, was an aggressive prediction that 3D raster (or Voxel) data will soon overthrow polygons as the privileged paradigm in 3D. Making bold predictions is risky anytime and anywhere. But especially so on the interwebs – where nothing ever dies.

I was starting to question my own conviction, until I came across Sam Pfeifle’s blog ‘Head in the Point Clouds’. Sam is the editor at Spar Point Group, and his semi-sarcastic post  ‘Good To See Laser Scanning Put to Important Work’ stepped on my… point, about the Raster Revolution.

Pfeifle’s post was about the new “Little Richards” custom ice cubes, made in the shape of Virgin Airlines owner Sir Richard Branson’s head. These icy avatars of Sir’ Shaggy himself, were made using 3D laser Scanners. 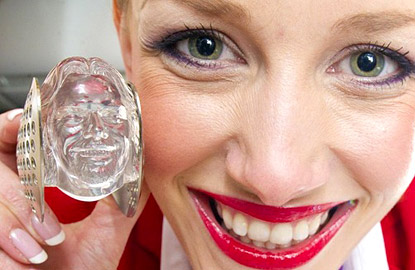 Pfiefle’s reasuring point was this – “… it’s a good sign for the rate of 3D data capture adoption when the technology starts to be put to more, shall we say, frivolous pursuits”.

Sir Richard has been busy restoring air travel to its former glamor during the Swinging 60’s, replete with on-board mood lighting, retro sensibilities, personal TV remotes, and now… Mad Men cocktails, brought to you by one of Virgin’s lovely ‘red-hot’ hostesses.

These crimson-lipped beauties wear smart-skirts, Updos, and ‘Upper Class Red’ lipstick with matching platform pumps that get their own close-ups in Virgin’s cheeky videos (below). Virgin  proudly boasts “The hottest flight-attendants in the Sky”.

Fig 2.  ‘Your airline’s either got it or it hasn’t’.  Official Virgin Atlantic advert from 2011.  An obvious homage to the sexy opening sequences of James Bond movies.

As an architect I appreciate Virgin’s optics, and the return of some kind of excitement to air travel. But Branson has pretty much mined this meme. What could be next? Austin Powers Approved rotating round beds in upper class… Mile-high key parties?

We’ll find out when Virgin Atlantic releases details of their new “Whispering Coach” for Upper Class in a few weeks. At least now when you fly the shagadelic skies, you won’t have to drink alone!  Sir Richard’s icy avatars will personally keep you company.

In Short:  The Raster Revolution is here.. all thanks to 3D laser scanning technology.

Thanks for reading and Subscribing –  FormFonts 3D Models