The interwebs are abuzz about a new motion sensor from Leap Motion. This USB sensor is smaller than an ALTOIDS tin, plugs into your computer, and delivers the best motion capture (mocap) the world has ever seen. So good in fact, some refuse to believe it.

Fig 1. – Leap Motion controller. It has a small form-factor, is 200x more precise than existing technology, and sells for only $70. This Mocap sensor will start shipping in just a few weeks.

Leap Motion was founded in 2010 by David Holz and Michael Buckwald in San Francisco. The concept for the Leap first came to Holz, now just 23 years old, during his doctoral work in mathematics at the University of North Carolina.

While working in computational fluid dynamics, David disliked having to use a mouse and keyboard to manipulate 3D models. He felt there had to be a better way. Holz determined to make “molding virtual clay as easy as molding clay in the real world.”

Four years later, the Leap has been made… but there are few details on how the revolutionary tech actually works. It tracks your fingers using three cameras and infrared LEDS, and reportedly tracks ‘thousands of points at once’.

It’s tempting to speculate that Leap is some kind of Raster Revolution in motion capture, but no one knows, as the exact methodology is still closely held.

By all accounts, the gesture-based interaction that the LEAP enables.. is an incredibly fluid experience. Latency is imperceptible because the sensor can update the position of your fingers.. faster than the monitor’s refresh rate!

Leap claims it is 200x more accurate than existing tech – a matter of some debate and considerable disbelief. But given the $14,000,000 in venture backing, tiny form-factor, 2% CPU loads, and the inexpensive price point… all signs suggest this quantum Leap is for real.

One GIZMAG commenter who claims to have been ‘flatting’ with the founders, says the Leap is so sensitive, it can even track your pulse. If true, imagine the biometric applications… just hold your wrist over a LEAP enabled iPhone to take your pulse!

Fig 2.  “Dammit Jim, I’m just a country doctor!” The medical ‘Tricorder’ that Leonard “Bones” McCoy used on Star Trek with that removable scanner thingy. This is what Gene Roddenberry thought contact-less medicine would be like in 2151. With the Leap Motion, we may be getting it slightly sooner.

This chatty flatmate also contends that LEAP Motion already has a ‘security app’ that uniquely recognizes your hand(s), and then unlocks your PC. This rings true, because if the LEAP can track thousands of points as claimed, it could certainly identify the unique network of blood vessels in your hand. 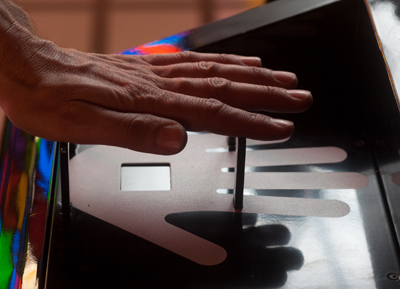 Leap may use vein-scanning for each fingertip as well. To capture digit-position, even when your fingers occlude one another, it may also leverage Inverse Kinematics. IK vein-o-matics could enable sophisticated, economical, and super accurate positioning at very little computational cost.

Leap Motion is currently in talks with manufacturers to have their Star Trek-nology ‘baked in’ to almost any digital device. Given the universality of gestures and the convenience of keyless and contact-less access, we may be seeing this technology sooner than you might otherwise think.

Aside from all the Minority Report gesture-foo, the Leap has immediate utility and application for 3D modelers. Model manipulation is a no-brainer. Just imagine godlike “Push/Pull” gestures in SketchUp. However, Leap will also enable the organic creation of 3D models.

A host of existing ‘digital clay’ modelers such as Z-Brush, Autodesk’s MudBox, Sculptris, and others, now have an insanely great direct-manipulation interface to digit-enable their software. 3D Modelers will be able to create with greater intimacy and expressiveness than ever before.

Just pair emerging glasses-free 3D Holo Tek with Leap Motion on an iPad, and you have a digital putty that is, as the potters like to say…some seriously plastic clay.

Steve… I hope you’re smiling down on us from that big Ashram in the sky.

Thanks for reading and subscribing – The FormFonts 3D Team.