If you follow this blog regularly, you’ll know I love GeoPorn. I’m not sure exactly what it is… but I know it when I see it. And I’m definitely not alone in this Earth kink.  We get more search engine traffic from people searching for “GeoPorn” than we really should.

So, I saw some new GeoPorn last week on The Science Channel. SC1 has a new TV series called “Heavy Metal Task Force”. It’s all about one of a kind earth-sized equipment. And my latest heavy metal crush is a Swiss Shotzie… named Menzi.  The Menzi Muck. 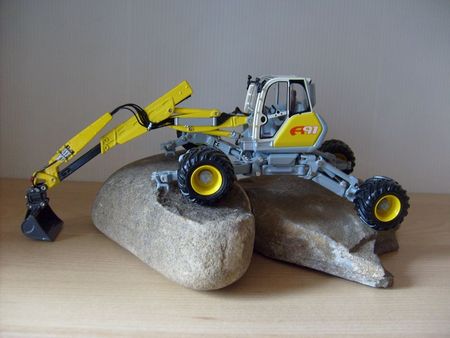 Fig 1 – The Menzi Muck A-91 Plus P-Matic “Walking/Spider” excavator. Invented and made in Switzerland for repairing the roads through the Swiss Alps. The Menzi A-91 excels at steep grade earth moving and many specialized construction tasks.

First of all.. about that name! The machine was invented by Ernst Menzi (1897-1984). Check. And the Muck? It’s the name of a familiar figure from a Swiss fairy tale (Muck, the jack of all trades). So Ernst’s first machine was called Menzi Muck and appeared in 1966.

Even in 1966 with B&W photos, you can see the Menzi Muck was the work of a super-genius. My German is limited to ordering white wines on the river banks of the Mosel River. But if yours is better, you can read more about Ernst das Uber-Engineer  (PDF below)

The Menzi Muck has to be the most perfect name for a earth moving machine imaginable. I mean really. Mucking about …you know, in the MUCK!!  And certainly, Menzi does a lot of that.

The Menzi Muck’er has four independent wheels that allow the excavator to tilt at various angles while keeping the cab parallel to the ground. It can operate in the muck – deep mud or water, and can handle slopes up to 70% ..with ease.

The Menzi is commonly used in Florida in canal construction, as well as in the mountains for setting ski lifts and cell towers. It also has a key role in keeping steep Alpine roadways and passes open, as well as a host of more specialized construction applications.

It also has a telescoping ‘stick’ that attaches to excavating buckets and other assorted gizmatics. Machine operators use the stick like an elephant uses its trunk.. which means the Menzi can stand on it’s “nose”, pivot, and ‘spider’ up and down steep slopes. 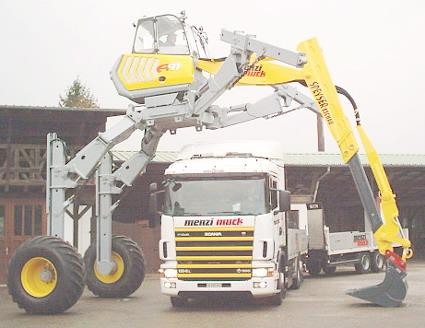 And finally, there’s just the TRANSFORMERS coolness of Menzi’s design. In true Swiss Design tradition, its pure function! And this functionalism is expressed as a purely kinesthetic aesthetic –  a kind of construction yoga!

But why try and describe this hypnotizing slow motion ballet…when you can just watch.

And this video is just a sample. The Menzi Muck website has a list of user-submitted construction videos. Unfortunately.. they’re all in .WMV files! But how else are you going to see cult classics like.. “On the edge with the Menzi Muck A91 with cable winch”

I highly recommend you watch ”Clearing work – Clearing a stream bed following storms with the Menzi Muck A91 4×4 Plus”. This video was the basis for Heavy Metal Task Forces segment on the Menzi Muck.

In Short:   Menzi Muck makes the coolest earth movers …on Earth!  Time you should get better acquainted with these.. Shotzie putzies!! It’s GeoPorn for the Heavy Metal Crowd.

Thanks for reading and subscribing | FormFonts 3D