Previously when wars ended, military tech put on civilian clothes and went in search of a consumer market. But given the 21st century invention of ‘perpetual war’, this technology transfer cycle is now far less obvious.

We are starting to see the first wave of military tech-transfer from ongoing wars in Iran and Afghanistan. And it’s logical that some of the very first military tech we see ‘pivoting’ into the civilian marketplace..  are advanced mapping technologies.

Last week I wrote about new holographic 3D maps being used by the military. And today, I’d like to introduce you to HOVER, a company in Los Altos, CA that has been providing advanced 3D mapping to U.S. special forces for years now.

For the military, Hover has been taking satellite and overhead imagery from whatever sources are available, and successfully photo-synthing’ these 2D pixel planes into three-dimensional views.. on the fly!  A Google ‘street view’ for the camou-crowd.

This clever transformation – from overhead aerial imagery into quick and dirty ‘ground truthing’ for military operations – is Hover’s top-secret sauce. It involves a spatial database and real-time imagery (say from a soldiers helmet cam) to create… Living 3D.

Hover is now pivoting Living 3D into the civilian marketplace. Their goal is to create a sticky 3D environment that is much more compelling and immersive than Google’s street view, which CTO Lu observes.. is used only sporadically, and then for highly limited tasks.

Lu also raises the ’pressing issue with mapping technology’ which is ‘datedness’. Once you start deploying photorealistic 3D maps and invite people to depend on them, up to date information counts.

This of course is a not-so-subtle swipe at Google, who’s aerial and street view imagery often is as much as a year out of date. It also (of course) plays brilliantly into Hover’s core cartographic capability, Living 3D.  So, how to get everyone at home to play along?

Hover has not yet launched and details are few. Yet it’s clear that Hover is nothing less than a crowd-sourced street view. It’s a staggeringly smart strategy.. something you’d expect from a 23 year old college dropout and a GoPro camera. Not a bunch of  ex-military.

It’s brilliant because Hover will likely be engaging, a ‘3D Pinterest’ enabling users to contribute to local areas of interest and importance.  Knowing that you’re getting the latest possible 3D imagery – from people who care about the place of interest… is compelling.

I also love the unsophisticated “collage” of the streetscape. It has a vitality and hyper-local quality. Like those chaotic community bulletin boards you sometimes still see in grocery stores. And why not let users likewise add local services.. “Dog sitting available here!”

Essentially, Hover is doing with photos what Google has been trying to do for years with Google Earth and SketchUp, make an up-to-the-moment 3D metaverse. Only the bar for user-generated geo-content has just fallen dramatically… to ‘point and shoot’.

True ‘Living 3D’ is by necessity photo realistic, yet the 3D photo collage looks ‘handmade’ and this added humanity.. is charming. I strongly advise Hover to guard the rustic quality of its 3D representation. It is a soft ( yet highly strategic ) design advantage.

Recall how SketchUp embraced the NPR (Non Photo Realistic) “sketchy” style of representation. This was no accident. It was brilliant marketing. SketchUp wanted to look like anything but CAD.. to build it’s own product identity.. sans the CAD legacy.

Yet I can easily see how some simple online editing tools would allow Hover users to add dimensionality and key details to the streetscapes. Such architectonic “level of detail” could create a still more useful and beautiful mosaic of Living 3D. 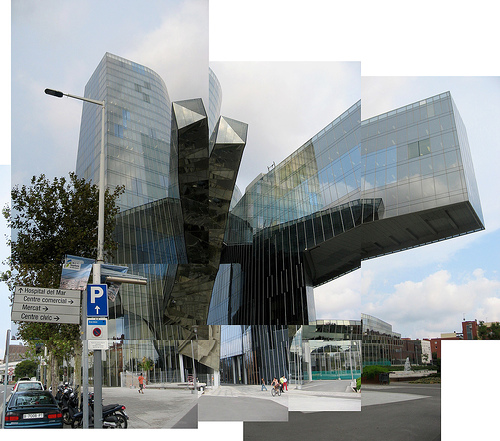 In Short – Living 3D is an excellent example of what Om Malik calls the ‘Alive Web’. Some may say the novelty-to-practical-use link is missing. Perhaps… but letting users make that link for you? Tech-Tactical genius!

Thanks for reading and subscribing – FormFonts 3D