There have been several major breakthroughs in geomagentism. Last week I covered a Finnish startup called IndoorAtlas, which exploits cellphone magnetometers to uniquely position users in the earth’s ambient magnetic field.

And now, scientists have confirmed that this is exactly the same tech animals use to navigate thousands of miles on their annual migratory paths.. Cellphones!  Well almost. Apparently Rainbow Trout have a biological equivalent… magnetosensory cells!

It’s long been suspected that migratory animals like sharks, fish, birds and bees were reading the Earth’s geomagnetic field. Scientists were in awe of this sixth sense, as animals were able to find their breeding grounds years later, despite man-made obstacles placed in their path.

Until recently however, Science was unable to actually prove geomagnetic migration. The hunt for magnetic cells in animals was hindered by the fact that these cellular magnets would necessarily be far apart from each other – to prevent magnetic interference. 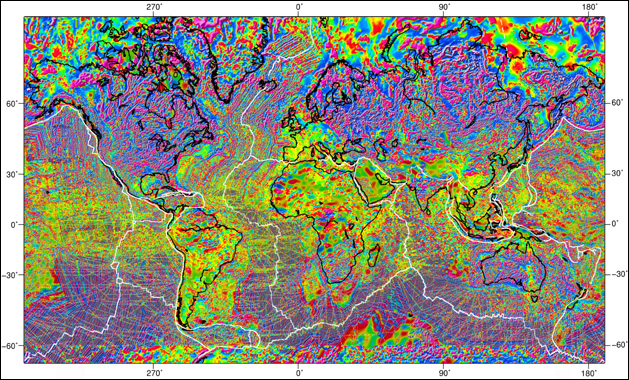 Fig 1 – The Magnetic Earth.  The World Digital Magnetic Anomaly Map shows the variation in strengths of the Earth’s magnetic field, after the Earth’s dipole field has been removed.

In a new report from the National Academy of Sciences, researchers announce they have finally found the elusive magneto-sensors and according to Caltech geobiologist Joseph Kirschvink… “These cells are magnetic monsters!”

Essentially the team isolated suspect cells in a petri dish – above a strong magnet which was rotating clockwise. Eventually, they found a small number of cells that began to spin likewise, and dissected them to find these cells were coated with a magnetic mineral called magnetite.

Scientists are confident the cells will fire their neurons consistently with changes in geomagnetic field, giving them conclusive proof that animals read the Earth’s geomagnetic spectrum… as easily as our eye’s read the visible light spectrum.

This discovery has immediately led to serious speculation that some humans also have magnetosensory cells. I knew it! This may explain why some people can actually ‘feel’ wi-fi, smart meters, powerlines, and other electropollution.

And still other scientists are suddenly attracted to the idea of ‘magnetically enhanced’ humans.

“It may sound far out there, but we’re contemplating taking cells that are not normally magnetically sensitive and creating cells that are magnetically sensitive. You could put them in the brain or body and turn them on or off with magnetic fields of certain wavelengths or frequencies to give balance or hearing back to the ear or smells back to the nose.”

J. David Dickman, Neuroscientist at the Baylor College of Medicine

Thanks for reading and subscribing – FormFonts 3D

Established in 2002, FormFonts 3D Models has served over 11,000 subscribers. FormFonts 3D Models offers over 50,000 of well-made and with the right-amount-of-polygons models and textures on a subscription basis. Throughout each month we upload new models for download. If you don’t see what you need, request it to be made. We offer models in the following formats: Google SketchUp ® | Autodesk®3ds Max®, Autocad®, Revit® & FBX
View all posts by Formfonts 3D Models →
This entry was posted in 3D Tech, Augmented Reality, GeoPorn, Uncategorized and tagged Animal Migration, electropollution, geobiology, Geomagentism, Indoor Atlas, magnetic migration, Magnetic Research, magnetometers, magnetosensory cells, megnetite, navigation, Rainbow Trout The magnetic Earth, wayfinding. Bookmark the permalink.
%d bloggers like this: