Steve Job’s product design strategy was simple – “Make signal, not noise”.  In other words, make products so different, that they will cut through all the noise in the marketplace. This incomparable strategy has worked brilliantly for Apple.. that is until recently.

Things are getting pretty ‘noisy’ out there. In its ongoing lawsuit, Apple claims that Samsung copied its design for both the iPhone and iPad, and this intentional confusion will very likely only get worse. What do you do if others dilute your signal?

If Apple cannot protect its ‘signal’ in the marketplace with patents, it will have to seriously rethink its product design strategy. Despite its ‘high-signal’ design, Apple is really a second-mover that makes failed first-mover ideas work.

The upshot of ongoing litigation may well be that Apple is forced to fail – as a first-mover. It will have to deal with vicissitudes of product design, manufacturing, and marketing – all without the advantage of hindsight, at greater expense, and under full public scrutiny.

Apple’s infamous cult of secrecy has created a small industry- those trying to glean Signals Intelligence (SigInt) from Apple’s patent filings. Ironically, testimony in it’s current lawsuit has revealed much about the company’s internal operations, than intended.

Bloomberg Businessweek recently examined 2011 Apple patent filings for ‘simulated holograms’. Bloomberg reports that Apple will embrace 3D holograms to keep ahead of competitors, and that may see holo’tek on the new iPhone 5 (coming in  September 012’). 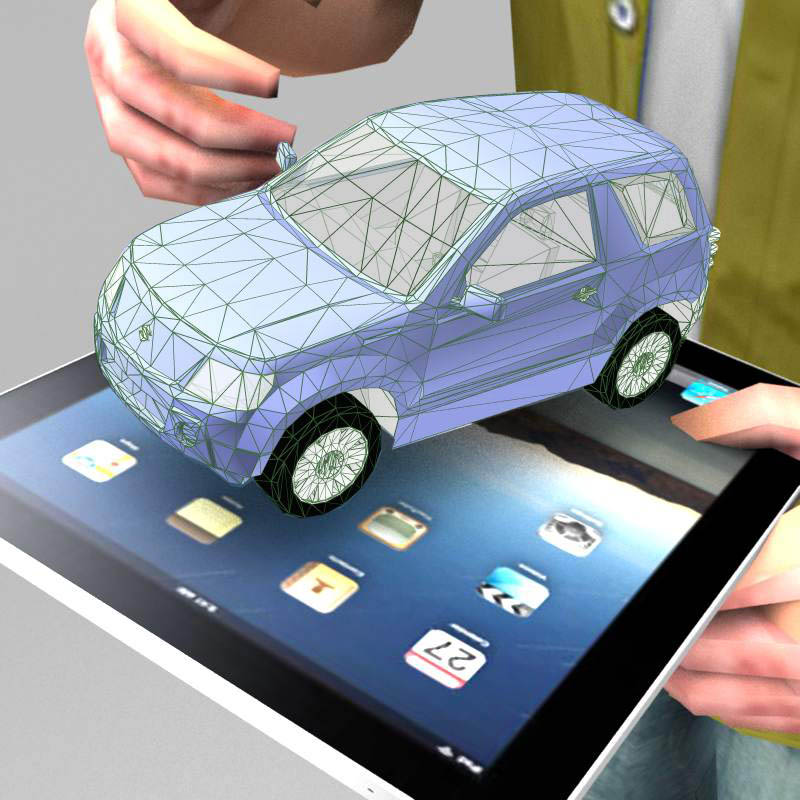 Back in April, I speculated that Apple would add glasses-free 3D to their tablets, so I’m not surprised. Rather, what is surprising, is just how this Holo’Tek actually works. Apple’s holograms are ingeniously ‘simulated’ via perspective manipulation.

In the movie Mission Impossible “Ghost Protocol’, Tom Cruise has to sneak down a  hallway in  the Kremlin – without alerting the guard at the end of the corridor. He erects a ‘camera/projector screen’ that projects video of the ‘empty corridor’.

What makes this bit of adaptive camouflage work, is the camera/projector setup tracks the guard’s eyes, changing the perspective of the image on the screen to match his – so that he can’t tell that it’s just a projection. The result is a 3D ‘simulated hologram’ .

This ‘simulated hologram’ works brilliantly – until multiple guards enter the hallway. The camera attempts to track more than one person – causing the projected image to bounce back and forth chaotically between multiple perspectives, making it obvious it’s a fake.

Apple’s ‘simulated hologram’ works in exactly the same manner. Only it projects video into thin air perpendicular to the iPhone/iPad. Oh, and they’ve solved the pesky multiple-person tracking problem.

The Apple patent states, “Each viewer could be presented … with complete freedom of movement … a hologram without the need for special viewing goggles or headgear.”

The net effect of this ‘Optical Internet’ is that multiple users can view, collaborate, and manipulate a shared illusion – a simulated hologram – from your iPhone!  Well..we’ll see! If this Holo-tek does debut with the iPhone5 next month, it’s likely to cause a PR firestorm.

[BTW, one of the most interesting reveals of the Samsung trail is that Apple spends $0 on marketing products. Again this only works when your products are ‘pure signal’].

Still, the larger questions remain… Do we really need Holographic displays? Will this be another “Oh my god how did we ever live without it?” product breakthrough for Apple? Arguments can be made for.. and against.

The novelty has already worn off for 3D movies, and 3D has yet to cross the chasm into the mainstream. I don’t see a killer app here, just a nice2have, and how long before holograms cross-over from novelty to utility – as is currently happening with Augmented Reality?

Ultimately, 3D displays may matter a good deal. People relate very differently to things that are ‘present’ in real space. They involuntarily anthropomorphize them. This subtle and complex behavior not well understood, and it’s holding back UI design ( Stuart Watt).

My personal take is that because virtual 3D Objects may be manipulated directly, they are not perceived as being explicitly constrained. Instead they are implicitly constrained by the physical laws of interaction -which we have consciously offloaded to the ‘environment’.

In short – When it comes to User Interfaces, constraints make all the difference. Explicit constraints can be infuriating.. while implicit constraints are effectively unconscious. Thus Apple’s embrace of simulated holographic displays may once again revolutionize the user interface.

Thanks for reading and subscribing – FormFonts 3D Models