The US Treasury will release the new 100 dollar bill in the next few months. Slated to be released in early 2011, the new ‘Benjamins’ are a bit behind schedule. The delays are due to manufacturing problems with the advanced new security features.

For Wal-Mart, the new C-notes can’t come soon enough. The world’s largest retailer has been bedevilled by the bogus bills of late – alternately passing ‘dead presidents’ to unsuspecting customers, then confiscating and tearing them up, resulting in customer lawsuits.

The $100 bill is the most frequently counterfeited note. North Korea Prints them like toilet paper, and as it turns out, our nation’s currency is surprisingly fragile. Economists predict that should counterfeiting reache 10% of circulating bills, U.S. currency will collapse.

Fig 1 – Info-graphics showing the amount of counter fitting of the US $100 Bill from It’s A Money Thing.

In the new C-note, Benjamin Franklin gets to stay.. but the rest of the bill gets a radical redesign. In addition to a color-changing ‘inkwells’ and ‘Liberty Bells’  the new $100 dollar bill includes a bright blue plastic  “3D Security Ribbon”. 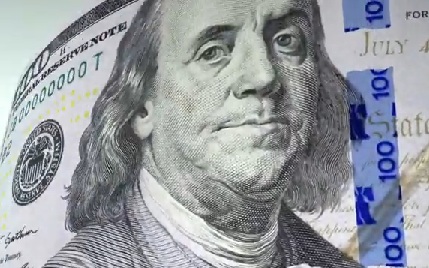 That’s right. The 3D craze that has swept through our movie theaters and television screens, has now hit the very lifeblood of America – our money! The bright blue plastic holograph runs down the bill like an animated racing stripe.

And racing stripe is an apt description. This isn’t a static hologram. The micro-printed “$100” text and ‘bells’  race across the blue strip like a Vegas Slot machine. This is definitely some trick Holo-Tek.

I think the Treasury has nailed it. This bill stands out, providing counterfeit detection at-a-glance. And the Treasury Secretary Timothy Geithner says the new $100 bill will be “exponentially more difficult for criminals to copy”.

Thanks for reading and subscribing to FromFonts 3D.

Established in 2002, FormFonts 3D Models has served over 11,000 subscribers. FormFonts 3D Models offers over 50,000 of well-made and with the right-amount-of-polygons models and textures on a subscription basis. Throughout each month we upload new models for download. If you don’t see what you need, request it to be made. We offer models in the following formats: Google SketchUp ® | Autodesk®3ds Max®, Autocad®, Revit® & FBX
View all posts by Formfonts 3D Models →
This entry was posted in 3D Tech, Holographic Technology, Uncategorized and tagged $100 Bills, Anti-Counterfitting Measures, Benjamins, C-Note, Counterfit Bills, currency collapse, Dead Presidents, itsamoneything, North Korea counterfitting, Tim Geithner, US Treasury, Wal-Mart. Bookmark the permalink.
Loading Comments...
%d bloggers like this: