MakerBot released its Replicator II last week to much fanfare. I largely ignored the press release, as 3D Printing is officially now at the height of it’s Hype Cycle. This is when I generally tune out.

Just to underscore this point, days after GARTNER put 3D Printing at the peak of its Hype Cycle, we saw a new mobile service – offering 3D Printing on street corners, just like gourmet fast food is sold from quilted stainless steel food trucks.

Can the reality TV series “3D Street Fab” be far behind? Yet as tempting as it is to dismiss this technology along with the hype, it’s just too important. There are a few things still worth noting about MakerBot’s new machine, and a simple list follows. 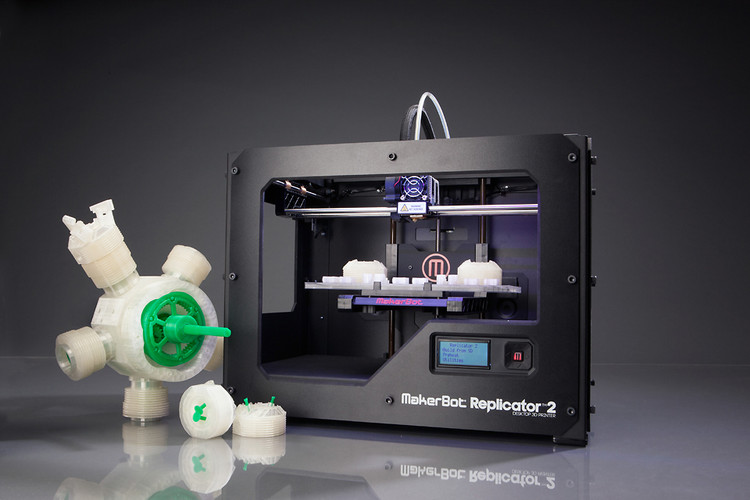 3D Printing goes Retail –  MakerBot opened its first retail location in New York city’s trendy NoHo district. I’m surprised to see an antiquated “showroom” model for selling a $2100 machine. But let’s be honest, MB has tried the DIY market and obviously think this is the way to go.

1.5 micron resolution – Gone are the ‘seamonkey’ ridges and discrete plastic layers. The new Replicator has much better resolution than the previous DIY-type machines. Very little finishing will be required for ready-to-roll models.

Black Steel Frame – This machine is desktop worthy. It no longer looks like one of those burnt-wood wall hangings your kid made with a soldering iron at summer camp. It looks like a real machine, and stronger frame helps support finer resolution.

Green Feedstock – The new Replicator II uses PLA (Poly Lactic Acid) plastic wire as feedstock. This not only appeals to hipster green sensibilities (not a putdown btw), it also allows the machine to build 23% faster.

Some are beginning to wonder if MakerBot’s Bre Pettis can do for 3-D printing what Apple did for computers. If that’s a plausible scenario for you, you’ll probably will want to read this article in Slate. For me, there’s only one Steve Jobs. I wish the irascible bastard was still with us.

In short: Mr. Pettis is simply one hell of an entrepreneur. He’s made brilliant use of available resources to get started.** And then while others laughed, he incrementally improved his product until now.. it’s nearly indistinguishable from offerings from major players.