At the end of May, LEAP Motion made a big noise with it’s inexpensive MoCap for 3D Modelers.  We haven’t heard much about LEAP lately, and they have yet to release their product 5 months later. But that hasn’t slowed others from taking the field.

Now another San Francisco-based start up called 3Gear has developed a gesture interface that can track fast-moving fingers. T the company will release an early version of its software to programmers. The setup requires two 3-D cameras positioned above the user to the right and left. 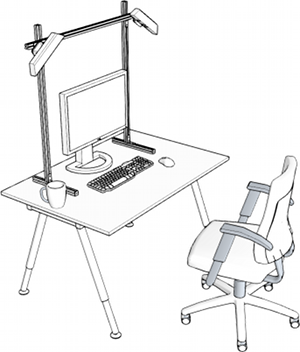 3Gear hopes third party developers will embrace their DIY Mocap, and create useful applications that will exercise 3Gear’s hand-tracking algorithms. The hardware ($330) is available on their websites, and the software is currently in free public beta (until Nov 30th).

Eventually, says co-founder Robert Wang, 3Gear’s technology could be used by engineers to craft 3-D objects, by gamers who want precision play, by surgeons who need to manipulate 3-D data during operations, and by anyone who wants a computer to do her bidding with a wave of the finger.

The known problem that 3Gear’s hand-tracking solves is so called “Gorilla Arm” – the ache of holding your hands out over-the-keyboard for existing tracking solutions. But while it’s nice to add gestures to your keyboarding, there may be easier tools for manipulating 3D objects.

Johnny Lee notes “You have to compete with the mouse, keyboard, and touch screen in front of you”. He sees Mocap in the desktop space as a productivity scenario that is a much more challenging sell, than in pure play scenarios like gaming.

In Short –  3Gear throws its lot into an increasingly crowded solutions space currently occupied by the likes of Israeli startup Omek, Belgian startup SoftKinetic, and another San Francisco Leap Motion.

Thanks for reading and subscribing to FormFonts Subscription 3D Model Library.

Meet the Nimble-Fingered Interface of the Future – Technology Review

Established in 2002, FormFonts 3D Models has served over 11,000 subscribers. FormFonts 3D Models offers over 50,000 of well-made and with the right-amount-of-polygons models and textures on a subscription basis. Throughout each month we upload new models for download. If you don’t see what you need, request it to be made. We offer models in the following formats: Google SketchUp ® | Autodesk®3ds Max®, Autocad®, Revit® & FBX
View all posts by Formfonts 3D Models →
This entry was posted in 3D Models, 3D Tech, Reality Hacking, SketchUp, Uncategorized and tagged 3Gear, depth cameras, gestural interface, gorilla arm, hand-tracking, Johnny Lee, Kinect, Leap Motion, mocap, motion capture, robert wang, san francisco startups. Bookmark the permalink.
%d bloggers like this: